“Have you ever heard of a “robot” that works in the water?” We held an event to introduce the “underwater robot”! 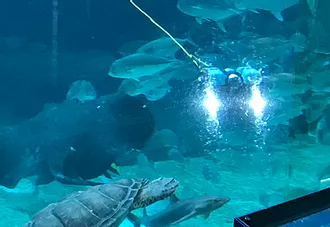 On Thursday, July 25, an event introducing underwater robots was held for elementary school students at the Suma Aqualife Park Kobe, Dr. Tamaki Urata, Professor Emeritus of the University of Tokyo and Chairman of the Techno-Ocean Network, who is one of the world’s leading experts in underwater robotics research and development, was invited as a special lecturer to talk about the fun robot and give a demonstration of its operation with the cooperation of the Maki Laboratory at the Institute of Industrial Science, the University of Tokyo.
In the operation demonstration, the underwater robot took powerful images of marine creatures in the “Wave Tank” at the Suma Aqualife Park Kobe, and showed them on a large screen in front of the tank, delivering images of marine creatures from an angle that is not usually seen. The public was able to deepen their understanding of and interest in the ocean through the underwater robots, which they are not usually able to see.